The expression coined by builder and author David Gerstel to describe a markup methodology that places the responsibility of recovering overhead costs solely on the labor or available production capacity a company has. Also know as a PROOF Type Markup or Indexed Markup, Differential Markup, MORS, DORS or Labor Based Markup the method is rooted in the principles of Activity Based Costing and provides a much more robust pricing method that doesn’t exhibit the dangerous profit leaks inherent in the Uniform Percentage Markup Method & Gross Margin Pricing.

It is basically accomplished through establishing Loaded Labor Rates for the particular trades a company performs that recover the company’s Fixed and Variable Overhead costs without reliance on markups applied to materials, equipment, and subcontracting which are then marked up just for Net Profit.

In his book Running a Successful Construction Company_

David Gerstel describes the method as: 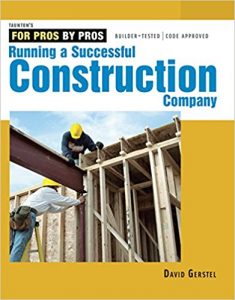 Because of the limits of the uniform percentage method, companies doing projects of varying size and experiencing large variations in volume year to year need another method of marking up for overhead. I call this method “capacity based markup.” It works like this:
• Figure Capacity
• Figure overhead for the year
• Figure amount of overhead you need to recover weekly per job
• Figure the number of weeks a job will take
• Multiply your weekly overhead figure by the number of weeks to get get the overhead you need to charge on the job

Web Articles on PROOF and Capacity Based Markup:

This site uses Akismet to reduce spam. Learn how your comment data is processed.